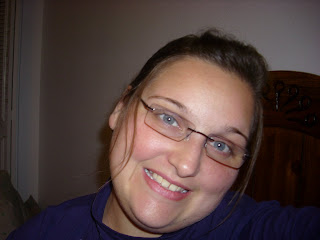 December of 2006 was the last time I had written anything. I had gotten involved in a lot of things at my church and writing was kinda pushed onto the back burner. Well, this past May, 2008, my pastor's wife came to me and said that she had heard about a writing contest she thought I should enter. The story was supposed to be a story of faith in God, in your own life or in someone else's.
.
When I got home that night I started thinking about what I should write. I have written many stories of faith that God has done for other people, but I wanted this story to be about what God has done for me. I have never had a serious illness or some kind of big, remarkable miracle, that has happened to me directly. I have basically grown up in church since I was 2. I got the Holy Ghost when I was six and it has ALWAYS been my desire to serve God.
.
As I was thinking, I began to realize that in life I have learned that sometimes the BIGGEST act of faith is simply trusting in God. I didn't get my story done in time for the contest, however, the above story, Learning to Hold His Hand, is the result.
.
After writing this story in July, I felt like God was pushing me to get back to writing. Since that time, God has continuously been giving me story ideas. I have already completed another story and have some more in the works. My sister told me recently that she believes God wants to use me with my writing. She told me that she doesn't believe God would give me the ability to write for no reason. As I write I pray to God, asking Him that above talent or ability, that He would bless my writing with annointing.
.
So as I picked up my old pen to begin, I thought, ok God, it's great to be writing again, but who will read all this stuff?
.
That my friend is you! ;-)
Posted by Mary Frances at Wednesday, October 01, 2008